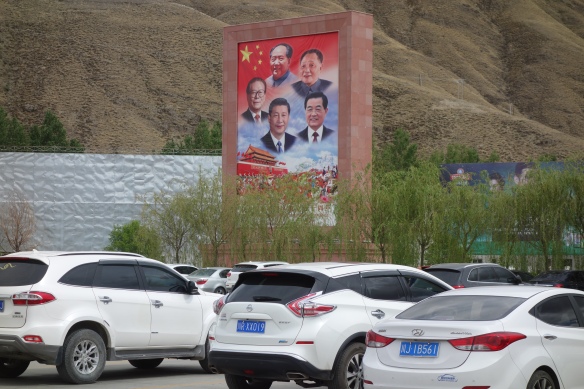 Arriving in Lhasa, May 2018, I’ve not been here since 1998 … new airport, three security counters, meet our guide, out into the parking lot, and a glimpse of the reality here.

The old road meant a three hour trip, but one of the highlights was this beautiful Buddha seen along the way.  This photo is from my last trip in 1998.

There is now a long, long tunnel that takes about two hours off the trip from the airport to the western edge of Lhasa. The tourist van is equipped with a camera (purple ball to right of centre) to record all that goes on inside and the speed of the van is monitored remotely. If a driver is going too fast, he is likely to get a phone call to say to slow down. The speed limit is 80 km/hr.

The first glimpse of Lhasa is now of high rise buildings at the west end of the city. Next is a security check stop then driving past more mostly empty high rise apartment buildings where Tibetans working in remote areas buy flats as an investment and for their retirement. If they are working and living in a remote area, as our guide said, “everyone wants to live in Lhasa”  (this is just like all Nepalis wanting to live in Kathmandu and 50% of all Georgians now living in Tbilisi) Eventually we got to our hotel in an area of … wide streets, new modern buildings. This photo is actually in Shigastse as I was too flabbergasted to take photos of the journey into Lhasa. 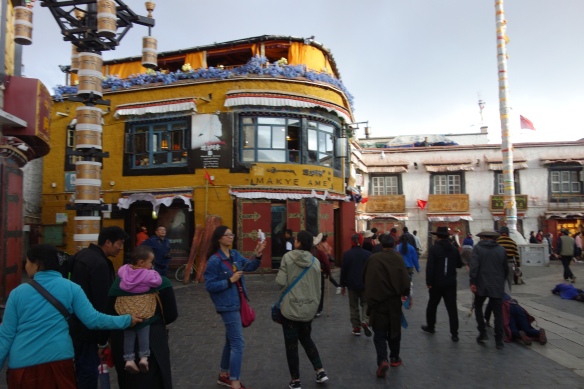 From the hotel, we walked along the wide sidewalks of the main street and then into the narrow lanes in the old city around the Barkor and Jokhang (main temple). Many of the buildings have been rebuilt but this area seemed to have mostly Tibetans going about their daily lives.

As we approached the Barkor, the wide walking street to circumambulate the Jokhang, we were blocked by a booth with an electronic reader for all Chinese ID cards and an x-ray machine. Everyone had to put our bags through the x-ray to continue on to the Barkor.

In late May it was Saka Dawa, the sacred month commemorating the birth, enlightenment, and parinirvana (death) of the Buddha. Thousands of Tibetans were circumambulating the Jokhang and hundreds were doing so by prostrating, measuring the length of their body with each prostration.

Most prostraters began their circuit with prostrations to the four directions in the large square in front of the Jokhang. 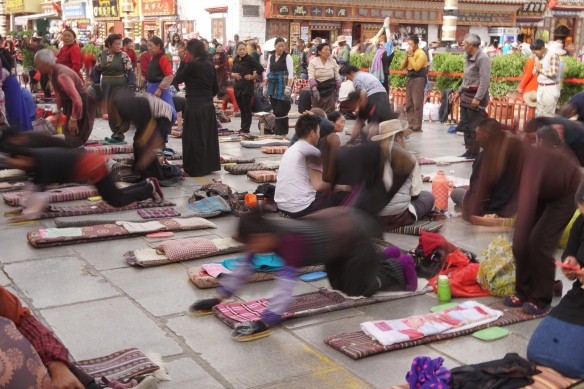 There were dozens of Tibetans doing prostrations in place at the front entrance to the Jokhang on the new looking squared flagstones.

This was a change from the 1990s, when it was still the patchwork of uncut stones. As well, we were not allowed up onto this part of the roof of the Jokhang.

Gone were the women from Kham wearing Khampa jewelry with tables to sell souvenirs in the 1990s. Affectionately called the “lookie lookie ladies” as they chanted ‘lookie, lookie’ at the tourists. The souvenirs were all for sale in shops. 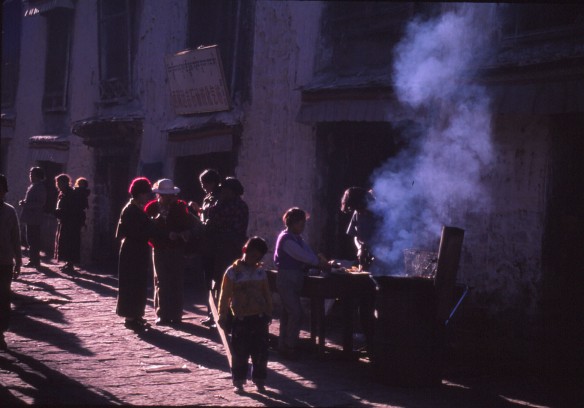 The devotees walking the sacred route or doing prostrations were still there but the street life has changed. Gone are the street vendors selling snacks or trinkets. 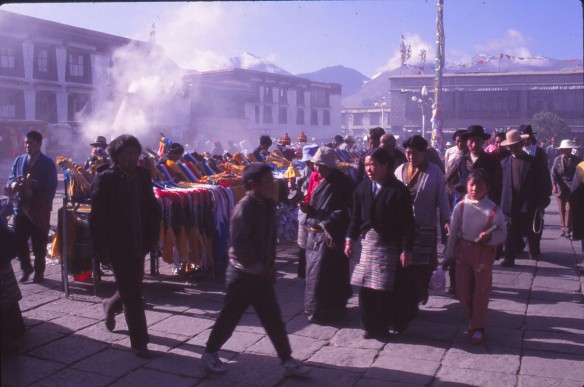 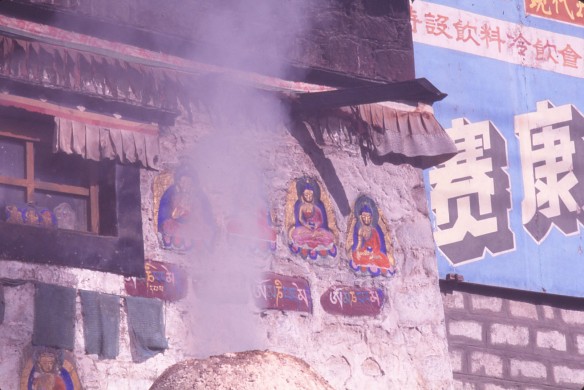