“The purpose of our religion is to perfect our minds,” says Tengboche Rinpoche. His point of view is the Buddhism of the Himalaya, the heart and soul of the Sherpa culture.

“I was born in Nauche and as a small child talked about wanting to go home to Tengboche,” says Rinpoche. He sits cross-legged on a wide bench in his dark kitchen lined with shelves of copper pots. In his lap he holds the small text from which he reads prayers every day.

“My mother carried me to Rongbuk Monastery in Tibet. Upon seeing a monk, I ran to hug him as if I had known him before. He was the nephew of the founder of Tengboche. The Abbot of Rongbuk recognized me as a tulku [reincarnate of a spiritually advanced person], the reincarnate of Tengboche’s founder, Lama Gulu.

“Back in Nauche, I identified Lama Gulu’s belongings. Everyone was satisfied after this proof, so I was brought to Tengboche at the age of five to be raised as the reincarnate lama and eventually become the Abbot of the monastery.”

Rinpoche spent decades studying at Tengboche and Buddhist universities in Tibet and Darjeeling until he was ready to assume the leadership of the monastery. As a spiritual leader of the Sherpa people, he is equally adept on matters as varied as health, education, politics, the building of bridges, and naming children.

Rinpoche’s life had been devoted to study of the Buddhist faith, which he describes by saying, “Our religion protects our character, which is why religion is so important in our culture. Happiness and unhappiness are caused by one’s state of mind.”

Merging the metaphysical with everyday life, the Sherpas’ prayers and rituals aim to generate positive spiritual energy for the benefit of all beings. Whether layman or cleric, religion is the way of life, unifying all aspects of existence. The practice of religion is not confined to a day of the week, it is an everyday affair.

The Sherpas’ religion is the oldest sect of Mahayana Buddhism, the Nyingma, which was established by Guru Rinpoche, an Indian mystic who was invited to establish Buddhism in Tibet about 730 AD.

Tengboche Rinpoche introduces me to the principles and practices of Buddhism through my work to complete the Sherpa museum. He often uses examples from daily life to illustrate the complexity of Buddhism. For example, one day talking about the Buddhist concept of emptiness:

“Think about this knife on the table,” says Rinpoche. “It’s real when you are sitting here in Tengboche. Will this knife be real to you in Canada? If you think about Canada right now, which is real — Canada or Tengboche, where your body happens to be?

“This is illusion, the unreal objects. The real objects and events happen in your mind. There are two ‘rivers’ to follow in our minds. The first, Sunya, emptiness, is about the knife. It deals with the perception or non-reality of all things. The second, Karuna, is compassion. After one attains perfect understanding of emptiness and compassion, one attains Buddhahood.”

Meditation, the main practice of Buddhism

Tengboche’s monks read the scriptures of the old sect of Tibetan Buddhism, the Nyingmapa.

I wonder how to reconcile the purpose of “perfecting our minds” with the many rituals, offerings, deities, and religious objects of everyday life.

“There are many kinds of offerings,” says Rinpoche. Pointing at the urn of smouldering incense hanging outside his window, he continues:

“This is an offering through the sense of smell. There are physical offerings such as torma [dough figurines], visual offerings like pictures and sand mandalas, sound offerings like the ritual instruments and chants or prayers. Our good intentions are the most important offering.” 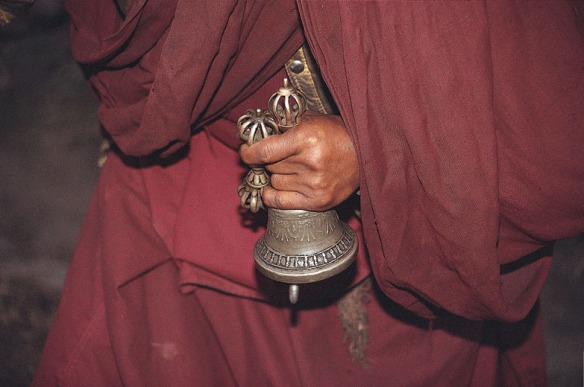 Prayer flags, attached to tall poles or on strings, flutter on rooftops and mountain passes, or are strung across rivers and paths. They carry printed prayers and often show the wind horse, the swift bearer of prayers. Their five colours signify the elements — earth, wood, water, fire, and metal.

Stupas, called chorten in Sherpa and Tibetan, are the numerous monuments found across the Buddhist countryside by paths, streams, homes, and gondas. Chorten represent the body, mind, and spiritual development of the Buddha.

During the historical Buddha’s lifetime, stupas were a memorial for the deceased. As the Buddha lay dying, his followers asked what should be done with his remains. He requested that his body be placed in a simple stupa. Since then, the stupa symbolizes the Buddha, and often offerings or the relics of the deceased, especially lamas, are sealed inside various sizes and shapes of stupas.

While discussing displays for the museum, Rinpoche explains the importance of Buddhist prayers on rocks, flags, and other objects:

“We see them everywhere in the land of Buddhist people. These religious objects are part of our daily lives. They help focus people’s thoughts on the Buddhist teachings and bring about a positive state of mind in people, to the benefit of all.

“The religious objects help create harmony between our actions, body, and mind. The Buddhist teachings will come easily to us when we gain merit first with our actions and body and then through our minds. So that everyone may understand them, religious objects have many explanations at these different levels.”

These objects allow anyone to gain spiritual merit through good intentions and each flutter of the prayer flag or turn of the prayer wheel.

1 thought on “To Perfect Our Minds”