st night thousands of Nepali commemorated the full moon and the birthday of the Buddha 10 days after the devastating earthquake of April 25, 2015.
A return to life and living, a reminder that life goes on, that our spirit continues as the Nepali people recover. Groups of young people stood with signs and donation boxes singing songs encouraging people to contribute whatever small funds they could to help those in need. 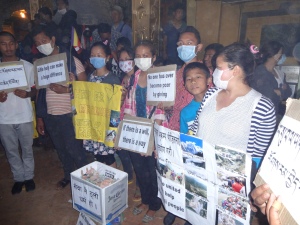 College students from near Langtang soliciting donations for their communities in Rasuwa district.
Boudha May 4, 2015

Life in Nepal has become before earthquake and after the earthquake. The key questions preoccupy most conversations: what were you doing…? where were you? Is your family all okay? How is your house?

Those of us with strong houses and open space were scared but unharmed physically, despite the days and days of aftershocks. In the 24 hours after the initial 7.9 earthquake, people in Nepal sat through 54 shakes over 4.1, and another 33 quakes in the next 24 hours. As of May 4, there have been 143 quakes recorded by the government seismological department since April 24. http://www.seismonepal.gov.np/index.php?action=earthquakes&show=past

In any other circumstances, each of these ‘aftershocks’ would’ve been considered a newsworthy earthquake on its own. This continued with

decreasing frequency over the next 3 to 4 days but the 6.9 quake on Sunday noon caught everyone by surprise for its intensity and duration and it seems that this quake caused a lot of the damage to buildings weakened the day before.

The quake happened to happen on the day of the week when people were out of doors – a Saturday afternoon. People are relieved that students were not in schools or college buildings that collapsed, workers were not in offices or factories. 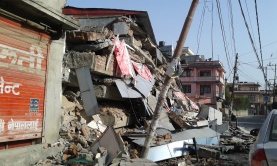 Most people were not so fortunate – the poor living in cheaply built rented rooming houses, those living in remote areas especially near the epicenters of the earthquakes, and those living near hills and ridges that bounced back the shock waves.

g. They are raising funds and gathering relief materials to take trucks much needed supplies to those in communities for almost every house has been destroyed. They are drawing on the resourcefulness and resilience of their mountain communities. 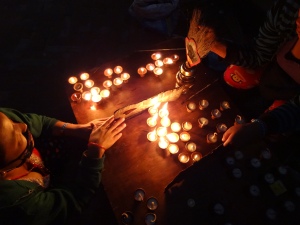 The night before the earthquake friends had gathered at Boudha stupa to remember a recently deceased friend. Ten days later we close the loop and return to living in the entirety – the sacredness and the dreadfulness – of this time and very special land, to mourn the dead and to pray for the living. 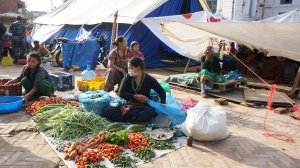 More regular posts are promised in the coming days and weeks.

1 thought on “Closing the loop: life before and after the earthquake”