Twenty years ago, Pemba had often been the cook on treks I was leading. Since about 1998, he has worked as a high altitude cook on Everest expeditions.

“I prefer expeditions to trekking because I make more money. Otherwise, my wife and I have just a small potato field and this little teashop. Without the expedition money, we could not afford to buy rice and staples at the market – everything has become so expensive!”

Besides, he adds, there are now very few jobs as cooks on treks since most trekkers stay in the many hotels and lodges that have sprung up along the trekking routes. In the decades prior to 2000, trekking groups stayed in tents with own cook and kitchen crew, guiding staff, and porters. With many groups coming with just a guide and porters, the jobs with trekking groups dwindled.

It was about the same that commercial expeditions started on Everest. With several expeditions attempting Everest each season, the demand for expedition workers boomed. At least 400 Nepalis of various ethnic groups, especially some Sherpas, work as high altitude climbers, guides, cooks, porters, and kitchen staff each season.

It is an occupational option, often taken by those Sherpas from poor families living away from the main trekking routes. They just do not have the capital or opportunity to start a hotel, or the education to work in another profession. One Sherpa from a poor family said he was in a fix when his wife demanded that he stop working on expeditions. Luckily for him, an uncle offered a small piece of land and a loan to start a hotel on a newly popular trekking route.

However, for many like Pemba, they may feel that they have fewer options to make money other than expeditions. “I could work in a hotel and one of my bosses at the company said that he would help me to get special training as a chef. But, I would have to work twelve months a year to make the same as I earn in three months on an expedition.”

His wife adds, “Those three months… the whole time I have a knot in my stomach and ask anyone coming down if they have seen Pemba.”

He admits that it is a risky way to make a living. I ask if he has attended the Khumbu Climbing School held each winter to train Sherpas and Nepalis in technical climbing safety. “No, I’ve not gone because I only go through the icefall twice each expedition, once up to Camp 2 and once down.”

Pemba leaves the kitchen for a moment, returning with a small red pouch. “These amulets, relics, and blessing cords from the lamas are all very potent. I have all of them blessed again each year by the lama in Pangboche as I go up for an expedition. I wear it under my clothes the entire time I am on the mountain.”

When I ask if he will go on an expedition again next year, he says, “Of course I will go, how else will I buy food in the market. But it is true, that it would be a lot less risk to my life to go get a job cooking in a hotel.” 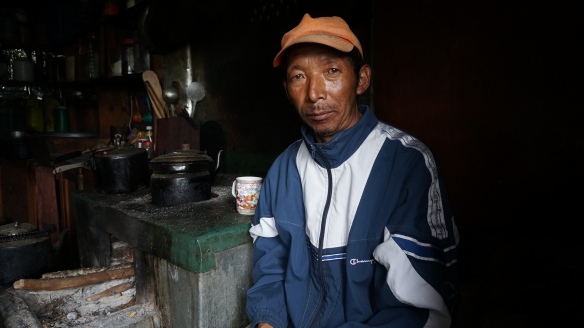